When building a new data warehouse or a data lake, one of the questions that will arise is whether you want to build a Persistent Staging Area (from now on PSA). In this blog post we will show you what a PSA is, what benefits to expect from it, typical design patterns to build it and finally an evaluation of how you can implement these patterns using a data warehouse automation toolset like the one of WhereScape.

The following article was written by my co-worker Elgar Brunott and redacted by myself. Elgar is a long year data warehouse expert who joined IT-Logix AG back in last autumn. We’ve worked together on various projects so far and had the pleasure in joining for a lot of thought exchange since then. So it’s a pleasure to see parts of our joint worked published in the subsequent blog post.

When building a new data warehouse or a data lake, one of the questions that will arise is whether you want to build a Persistent Staging Area (from now on PSA). In this blog post we will show you what a PSA is, what benefits to expect from it, typical design patterns to build it and finally an evaluation of how you can implement these patterns using a data warehouse automation toolset like the one of WhereScape.

Benefits of a Persistent Staging Area

Having such a PSA will give you all the historical changes in data since you started loading data. This has the following benefits:

For implementing a PSA we separated the corresponding design patterns into basic and advanced. In the below diagram you see a basic impelmentation of a PSA where the following assumptions apply:

In this diagram we took the table “customer” from source system X as an example.

Let’s explain the different objects you see in the diagram:

As described in the assumptions above, we assume that delete detection is handled by the source system itself. And that data is loaded in full over and over again. Fore some projects this will work perfectly fine. But in many situations you will have the need to load the delta from big tables only. In addition, many source systems sadly do not support delete detection on their own. In such cases we will need to extend the PSA with more advanced logic as described in the next paragraph.

Let’s have a closer look at these objects:

Given the explanations above you realize that such a PSA needs a lof of database objects and logic for each and every source table. Creating them manually results in a high investment with a lot of repetitive work. Nevertheless, in a long term and architecture perspective, building up a PSA is a very good investement as explained in the introduction of this article. On the other hand, defending it to stakeholders can be hard because your investment in the starting phase of your project is higher without having a directly visible business benefit.

This challenge can be addressed using data warehouse automation tools. Our goal to achieve was generating a PSA including delete detection, historization and delta handling with a minimal amount of manual effort. We selected WhereScape as the right tool suite for this and developed such a solution. In WhereScape you’ll find two applications to help you generate the PSA: WhereScape 3D (3D = data driven design) and WhereScape RED.

WhereScape RED is the actual development environment. You define the metadata for every needed object (like the tables and views shown above) and RED will generate the DDL and SQL statements for you and deploy them to the target database. Even though this already speeds up the process tremendously, you still need to add every object manually.

In WhereScape 3D you start with a model of your source system’s tables. Afterwards you’ll define “model conversion rules”. In those rules you can define what should be done with every source table using a rich set of rules and features, e.g. “copy entity” to derive the necessary objects for every source table. This allows for generating all needed database objects automatically. Afterwards you can export these objects to RED and let them be deployed to your target database. Whereas RED automates the code generation, 3D “automates the automation” by feeding RED with the necessary metadata. Here the true power of data warehouse automation becomes visible. But it’s not only about the decrease in development time. The following aspects are also very important selling points for using a data warehouse automation approach:

WhereScape 3D gives you all the tools for defining all the layers of a data warehouse. But it doesn’t give you a complete set of “ready to use” model conversion rules which will do this for you (at least not for the PSA requirements described in this article). We had to implement this part ourselves.

For generating the basic version of the PSA, setting up the generation process was fairly easy. When we made the step to the advanced PSA we had several challenges which needed some out of the box thinking. These were related to topics like

Also the fact that WhereScape is platform independent makes the investment very valubale. For example, you can migrate from Oracle to Azure SQL by simply choosing a different target platform. The needed ETL and database logic will then be generated in Azure optimized SQL code.

Thanks a lot reading this article. We hope it was informative. On a lot of topics we scratched purposely only the surface and did not go into too much details. Otherwise the article was going to be a lot longer than it already got :-).

Please leave any comments / questions below, we’d love to hear from you!


Obviously I hadn’t time to write much on my blog during the last nine months. Let me share with you what topics kept me busy:

For the upcoming months I’ll be visiting and speaking at various events:

It would be a pleasure to meet you during one of these events – in case you’ll join, send me a little heads-up!

Last but not least, let me mention the Scrum Breakfast Club which I’m visting on a regular basis. We gather once a month using the OpenSpace format to discuss practical issue all around the application of agile methods in all kind of projects incl. Business Intelligence and Datawarehousing. The Club has chapters in Zurich, Bern as well as in Milan and Lisbon.

In this post I outline how I managed to get a cloud based training environment ready in which WhereScape RED, a data warehouse automation tool,  connects to a Teradata database test machine.

A few weeks ago I had to organize a so called “testdrive” for a local WhereScape prospect. The prospect uses a Teradata database appliance. Hence they evaluated to use WhereScape RED based on Teradata too. As a local Swiss based WhereScape partner we received a virtual machine containing a SQL Server based WhereScape RED environment. The training had to be run onsite at the customer’s location, IT-Logix provided their set of training laptops, each containing 4GB or RAM. These were my starting conditions.

First of all I thought about how to deal with Teradata for a training setup. Fortunately, Teradata provides a set of preconfigured VMs here. You can easily download them as zipped files and run it using the free VM Player.

Based on my previous experience with organizing hands-on sessions, e.g. during our local Swiss SAP BusinessObjects user group events, I wanted to use Cloudshare. This makes it much more easier (and faster!) to clone an environment for multiple training participants compared to copying tons of gigabytes to multiple laptops. In addition, the 4GB RAM wouldn’t be enough to run Teradata and WhereScape properly in a performant way. So I had two base VMs (one from WhereScape, one from Teradata) – a perfect use case to use the VM upload feature in Cloudshare for the first time.

I started with this support note which explains how to prepare your local VM and load it up to my Cloudshare FTP folder. From there you can simply add it to an environment:

After having uploaded both VMs it looks like this in Cloudshare:

I increased the RAM and CPU power a bit, and more important configured the network between the two machines:

Here I had to specify to which virtual network I’d like to connect the VMs. Please keep in mind that this doesn’t provide an automatic DHCP server or similar. Either you create one within your machine or – as in my case – had to set static IPs within the individual VM (both were delivered by using a dynamic IP provided by the VM Player). Changing the IP wasn’t a big thing, neither on Windows nor on Linux.

But I quickly found out that the Teradata service didn’t run properly anymore afterwards.

First of all I had to create a simple test case to check if I can connect from the WhereScape VM to the Teradata machine. Besides a simple Ping (which worked) I installed the Teradata Tools & Utilities on the WhereScape machine. As I couldn’t establish a proper connection, I had to google a bit. The following article gave me the hint to add a “cop” entry to the host file: 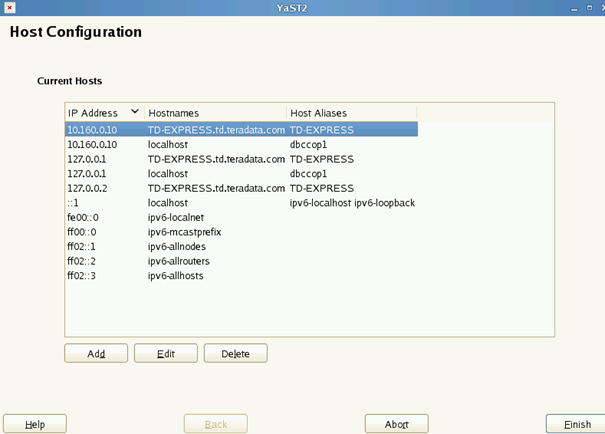 After a restart of the machine, Teradata was up and running again. This you can verify with the following command “pdestate -a” by the way: 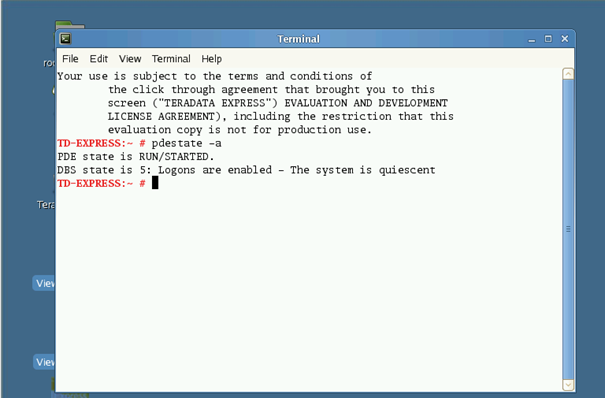 In WhereScape RED I created a connection to point to the new Teradata database:

… and finally loaded a few tables from the SQL Server to Teradata:

Once I finished the work, the most important step is to create a snapshot:

Based on this snapshot I finally cloned the environment for the number of participants in the testdrive with just a few clicks. After all, every participant had his own (and isolated) environment consisting of a full stack of source database (SQL Server), WhereScape and the target DWH database (Teradata).

As outlined in my previous blog agility in business intelligence projects can’t be produced directly. Instead you should invest into professionalism, standardization and automation. In this post I’m showing an overview of concrete building blocks to support you on this way.

In my Agile Business Intelligence Maturity Model (ABIMM) I’ve collected many building blocks and arranged them in a practical sequence. An overview you can find in the following illustration:

We can extract a few key messages from this model:

A more detailed explanation of the Agile BI Maturity Model can be found in my recent article in the German TDWI journal “BI-Spektrum“.

Here you find the English translation of my article!

Many thanks to my company IT-Logix and all the great staff working with me. You are the indispensable foundation for all my BI related work. Don’t forget, you can hire me as a consultant 😉

Following you’ll find the literature list on which the different building blocks and the model itself is based on:

Parts of this blog have first been published in German here.

Listen to my podcast episode at Scrum Master Toolbox